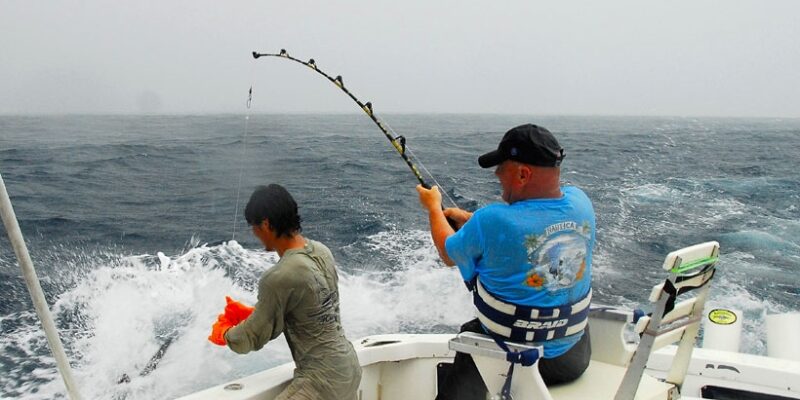 I was lucky enough to spend four days on the water at Panama Big Game this September taking pictures for New Jersey boys Ron Torkas and Joe Ozalas. Wahoo to 50 lbs. were everywhere. I lost count early on. Small yellow fin tuna were hitting on top water—exciting action! Lots of small dorado, yellow snapper, blue jack, bonito, and rainbow runners kept the boys busy with too many jack and houndfish to keep track of. Oh yeah, we ran into a couple of Marlin too.

We fished four full days with Captain Tati and mate Eddie in a 31′ Bertram. Most of the time we fished near pinnacles in the area of Montuosa but also visited Islas Secas for roosterfish and Los Ladrones for snapper. Poor Ron and Joe hardly had time to fish for Marlin with all the wahoo action. “No more wahoo!” was the final decision. This cleared the decks for serious marlin battles. Early on day three, we arrived at Montuosa, quickly landed five bonito for bait and dropped them over with a couple of live blue runners for variety. Joe hooked up with a marlin almost immediately, fought for about 45 minutes and released a black weighing in the 350 lbs. neighborhood. We had barely recovered when Ron hooked another black. After about a half hour fighting the marlin in the pouring rain, Ron released his black, also running about 350 lbs. We spent the rest of the day bottom bumping for huge snapper and casting surface plugs for tuna. Not bad for the off-season. Check out the picture of Ron with his Rooster.

We usually arrived back at the lodge by 5:30 or 6:00, showered and spent the rest of the evening gorging on Lee’s sushi, ceviche, home cooking, drinking rum and telling lies. Great fun! The rooms are large, air conditioned, with king-size beds and the showers have plenty of hot water. The mini-bars are kept chock full of beer and cokes (no extra charge). I don’t know why anyone would call August/September the “off” season. It rained on us once during the day, the weather was reasonably cool, and there was no one else fishing anywhere in the area. The seas boiled with life. We probably could have nailed more marlin but the boys wanted to taste everything the area had to offer. Bruce Morris

Lee, thank you very much for making our fishing trip a very memorable one. I had great time! The fishing, staff, food, service and accommodations were excellent. The travel between airports and taxis that you arranged to get us to and from Boca Brava were flawless. Your crew knows how to catch fish and the sights of all the islands and nature while we were fishing were awesome! You run a top quality operation and I would highly recommend your destination to anyone who wants to catch a black marlin and a lot of fish too. Best of continued success to you. Sincerely, Joe Ozalas.

Hi Lee, Thanks for a great time at your lodge and thank your crews for a great stay and fishing trip, it was good to have caught a once in a life time snapper like the one I caught (60 – 70 lbs). I will be looking forward to the next trip to your lodge. Best Regards, Martel Muhlestein