January we had cold green water for about half of the month – which hurt the action. Water was from 78-80 and green. The rest of the month had 80-82 degree blue water and did quite well. It Really has turned here the last few days – 12 Marlin were caught – 7 Blacks and 5 Blues – with 4 over 500lbs in the last 4 days of January.

Also have some excellent video of a pod of Killer Whales swimming and playing around one of our boats – swimming underneath and planing off of the bow wake – hope to have that ready for next months report. They are very seldom here in this area – Captain last saw them in 2006 (cold water current also) and it has been 15 years since the Mate last saw them. Doing good on tuna – lots of 100lb + Yellowfin around and sails are here in greater numbers than they have been for some time. Dorado (dolphin) – which usually are here in great numbers are not but the ones we are catching are big fish – most over 30lb. Capt. Lee. 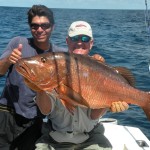 Hi Lee:
Wanted to says “Thanks” for another great trip to Panama Big Game Club. My sons and nephew had a blast. I know the bill fish were a little picky, but I would rather cast topwater poppers to yellowfin tuna anyday. The boys got 14 the first day all on topwater. 2 in the 15lb range, but 12 in the 40 to 50lb.. 2 cubera’s but 50 and 55lb..along with some nice amderjack on the bottom, I had forgotten how strong they are.. Got 2 big yellowfin on live bait. one 180lb and the other 200lb. Both of those were my sons largest fish ever. Hey, the river fishing was fun. Nice snappers, sharks, hope you show the picture of the eel, maybe not the frigate bird, although its got quite a story for his grandkids. PBG, never ceases to amaze me, for the quality of variety..You have the best captains in the game there. Definately one of the top locations in the world for “Big Game.” Will see you again very soon. Say “Hi” to all the gang there for me, and thank you for all the hospitality.
Yours truely, Captain Mike Love.

LEE, OH BUDDY, AS ALWAYS HAD A GREAT TIME WITH YOU AND YOUR STAFF AT PANAMA BIG GAME FISHING, GREAT WEATHER, GREAT FISHING ,GREAT FOOD [GAINED A FEW POUNDS] AND ABOVE ALL GREAT COMPANY AND SERVICE, GOT MORE GREAT MEMORIES OF PANAMA, LOOKING FORWARD TO OUR NEXT TRIP DOWN TO SEE YOU, I WILL ALWAYS REMEMBER HOOKING UP THAT 200 LB TUNA, SETTING THE HOOK AND HANDING IT OFF TO H. B. [ MIKE’S NEPHEW] AND WATCHING HIM WORK FOR AN HOUR, THE BATTLE WAS ON!!!!!!!! I’M KEEPING OUR 70TH BIRTHDAY TRIP ALIVE,,,,,,,YOUR PAL LYNN.