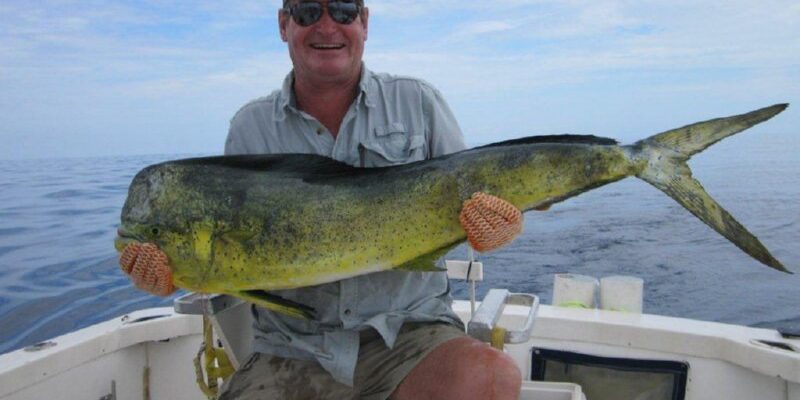 February was all over the board here, fishing water conditions changing daily – not used to that here. Fishing was 50-50 between very good and slow. 4 groups caught 0 marlin and the other 4 groups caught a total of 18 – 12 Blacks and 6 Blues – with one group catching 12 of them. Sails where around in okay numbers – Dorado where not here as they usually are but the ones that where caught where large fish – also some large Cubera Snapper where caught (we release these) and had some good action with surface poppers on Mullet snapper. 4 tuna caught over 200lb and some smaller ones on poppers – but not the numbers we are used too. We had two groups fishing here from new countries – First was Per-Gunnar (great fisherman) and Marianne from Sweden- a great couple and allot of fun – and first group from Zambia-Safari Hunters – really great people – anyone looking to go on a real African hunt – I would contact them – had amazing stories to listen to – first day ever blue water fishing got a Black Marlin, Blue Marlin and a large sailfish – next day a double – 400lb Black and 500lb Blue – both released – so now they have some fishing stories to tell as well – Mike and Val – Wild Cat Safaris wildcat@zamtel.zm and John and Laura – Muchinga Adventures – www.muchingaadventures.com email johndp@zamnet.zm Capt. Lee

Hello lee,
Thanks for three intensive days with nice fishing and excellent food and drinks. I think I got some added pounds to my body weight. It is a pity that your lodge is so far away from us, but we can absolutely recommend anyone to visit you for fishing. You will find some pictures of the BIG Amberjack. Best regards, Per Gunnar and Marianne

Captain Lee
We wanted to thank you for a great Fishing Experience on our recent trip to Big Game Panama. The four days of fishing was outstanding and the 12 Blue and Black Marlin (along with tuna, snapper, sails, and amberjack) that we caught far exceeded everyone’s expectations. Your crew on the boats and at the Lodge were very accommodating and professional. Lastly the food, unbelievable what you provided in freshness, variety and taste! I look forward to another great trip in the future. Best wishes, Gary Luebs and Group. 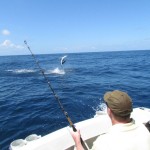 Dear Lee
We managed to get straight through to London without a stop off in Miami so were pleased to see our 2 year old this morning. Thank you so very much for an outstanding 6 day fishing trip, it was amazing. Your team are a credit to you, food was fabulous and we take home not only life long memories but the photo’s to prove not all fishermen lie about the big ones…. Getting blue marlin, black marlin and sailfish on day one was only beaten by having both 500lb blue and 400lb black marlin being brought in together on day two. Val’s 220lb yellowfin tuna, all the snappers, needlefish and other fish were icing on the cake. We look forward to seeing you all soon and will send photos as soon as we get home. Kind regards, Laura and Johnny. 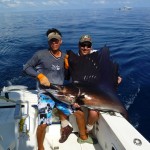 Well the 3 Musketeers, Mitch, Mike and Myself took off again, tired of the February cold. We overnighted in Panama City and then took a shuttle flight over to the city of David. From there an hour boat ride through a jungle river landed us at Boca Chica and the Panama Big Game Club. Run by Lee Campbell, the club has been operational for 10 years. It is perched on a steep hill overlooking the river and features very nicely appointed cabins (air conditioned, hot water, small refrigerators) and a great club house/dining room (TV, internet access, treetop monkey watching). The Panama Sport Fishing Lodge is right across the river.

Wake up is at 5 AM and after breakfast you are in the boat by 6 AM. The fleet consisted of a 30′ Bertram and a 30′ Phoenix, old but serviceable, and they both provided good sun shade when needed. At the camp we were joined by Mike and Bob, so there was 5 of us fishing 2 boats and we were being catered to by the entire camp staff! It was a 42 mile run to Montosa and we were always the first ones out there, soon joined by the center console boats from the Panama Sport fishing Lodge, Pesca Panama, and Isla Secas Resort. We trolled live baits and plastics for three days, catching marlin and tuna, and then on the fourth day we targeted roosters and snappers around Isla Secas 19 miles away. Since there are no rivers near Isla Secas, there is no runoff and the waters are truly magic blue in color, some of the best I’ve seen in 35 years of foreign travel.

Saturday we returned to Panama City, had a great steak dinner at Gaucho’s, and returned to the US on Sunday. Everyone agreed it was a great experience and we can’t wait to plan the next one, maybe Panama maybe Galapagos again. Want to join us?? Regards, Rich Adler. 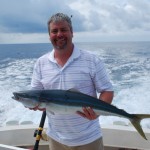 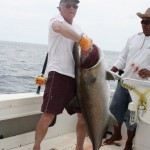 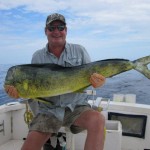