We are in the middle of a major renovation here – this finds me overseeing 4 different construction crews – all cabanas are gutted and being re-done – along with the clubhouse remodel – new infinity pool going in – new captains quarters – new engines in the Bertram and Albermarle and a new 28ft Carolina open Sport Fish on the way down – Wow – we are also working on purchasing another Sport Fish and have permits for a new dock, retaining wall, combo Garage (for off road utility transport) and generator room.

My new living quarters are going in above – which will be started as we finish the current work. In May we did get the new owner (Mark Charman) out for a day – since he is spending $1,000,000 on Panama Big Game I figured the least we could do is fish him for a day and he had a bang up day with many tuna – 20 to 150lb range – first time for him taking them on surface poppers (along with live bait) so he really enjoyed that. It is an exciting time here at PBG – but trust me – I will be glad when all the dust settles and I am back into my regular rhythm. July, August and Sept are some of the best months to fish here – very good for marlin – especially larger Blacks and the best time for all around fishing here.

It is the rainy season but it rains late in the afternoon or at night – so it is not a problem for fishing and can fish all day and not see another boat – that is my kind of fishing. We just finished fishing the first group here after the new ownership. Bryce, Ty and Conner had a great trip with a lot of action – big tuna – one well over 200lb – which is the latest I have seen the 200 +lb tuna here – usually they are gone by the first of June – a lot of nice Mullet Snapper, Cubera Snapper and Bryce caught his first Black Marlin. Capt. Lee

The first of our two additions to the fleet – a 28′ Carolina being shipped down this month.

We had 4 great days on the water 3 off-shore and 1 near-shore. We caught fish everyday highlighted by a ~400 lb black marlin, several yellow fin tuna including a 200 pounder, several large Cubera snappers (which all are released alive here – house rule) as well as some dolphin, barracuda, mullet snapper, yellow snapper, blue jack, Spanish mackerel, and many others. Our crew and captain were great, and Capt. Lee and the house crew prepared exceptional meals and gave us everything we needed. We plan on coming back to see the new facilities in the next year or so including the new pool which is coming along, and I plan on catching that elusive rooster fish. Thanks Capt. Lee and the whole team. Ty, Bryce, and Connor. 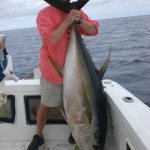 No – we do not have big Strippers here but they do in Pt Pleasant Beach – here are some photos sent from Capt Rich Adler- www.tunawahoo.com 609-870-4592. He is having a great year on large Strippers. His Boat “Tuna Wahoo” is a 31′ custom Rampage sailing out of the Canyon River Club. They supply all bait, tackle, and ice and fish from Island Beach up to Sandy Hook and out to the canyons. They have been fishing out of Manasquan inlet for over 30 years.