Again July and August are two of the best months to fish here. We only had 2 groups this year though. Always a pleasure to have Howard Chong with us – fished 3 days in July – his fifth time here. Had a very good day inshore with wahoo, jacks, sierra mackerel, cubera snapper and rooster fish – action all day. Next two days fishing offshore the highlight was a black marlin each day with nice catches of wahoo, yellow fin tuna caught on spinning with surface poppers, and dolphin. 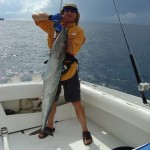 Next group was the Everett family-always enjoy family groups the best. It was their first time here – from England but came to us by way of Chub Cay- Bahamas. They are avid fisherman all and mostly fly fish for bone fish and tarpon-probably one of the hardest things to do in Sport Fishing. Had pretty good luck, corvina, yellowfin tuna, wahoo, dolphin and the highlight a nice blue marlin that took both baits of Father and Son so both fought it to the boat and released him in very good shape – not a legal IGFA release because of the double hook up but allot of fun just the same.

Off Season Marlin – last 8 groups (including last week in April). Below all released alive – with all live bait we only use circle hooks. Love party-2 blue marlin ~ McDonald party-2 black Marlin-1 800lb. ~ Dempsey party–no marlin ~ Charles Party-1 black marlin ~ Asherl, Perez, Sinclair party-1 black marlin ~ Olivera, Hunter, Amador party-no marlin but hooked a big black on a surface popper inside of 20ft. from the boat and when hooked came clear out of the water and jumped 4 more times (luckily away from the boat) then the popper pulled out ~.Chong party-2 black marlin ~ Everett party- 1 blue marlin ~ Captain Lee Campbell 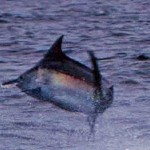 Here I am back in the water taxi from Pedregal Marina to Isla Boca Brava, home of the Panama Big Game Fishing Club. This will be my fifth time there and during the one hour boat ride out to the island I anticipate seeing the head honcho and my buddy, Capt. Lee Campbell and the crew that makes up this outfit. I can taste the first Pina Colada already. I had just finished three days of fishing in Costa Rica so I decided to stay in shore on the first day hooking up on Sierra, jacks and roosters. This is an easy boat ride working the small island groups and bottom structures around Boca Brava in calm seas. The action was good on light tackle. The next two days were reserved for my favorite area Montuosa Island and the nearby Hannibal Bank. This is a 2 hour trip out with the ever present possibility of a few rain squalls this time of year. I was not to be disappointed. The big Dorado and big tuna are not around this time of year although I caught enough for the table and some sashimi for appetizers. The Wahoo were on the small side, about 20 – 25#, but, in abundance (4 on board in 15 minutes) with a total of 7 until I decided to quit. Now – the reason I go there – Marlin. I picked up one each of the two days out there in the 350# class on live bait. No backing down on these babies for me. It’s strictly “mano-a-mano” on 80# test so you can expect to be in the chair around 45 minutes per fish. Aloha, Howard Chong, Jr. Honolulu, Hawaii 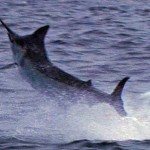 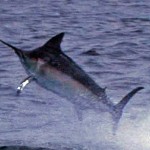