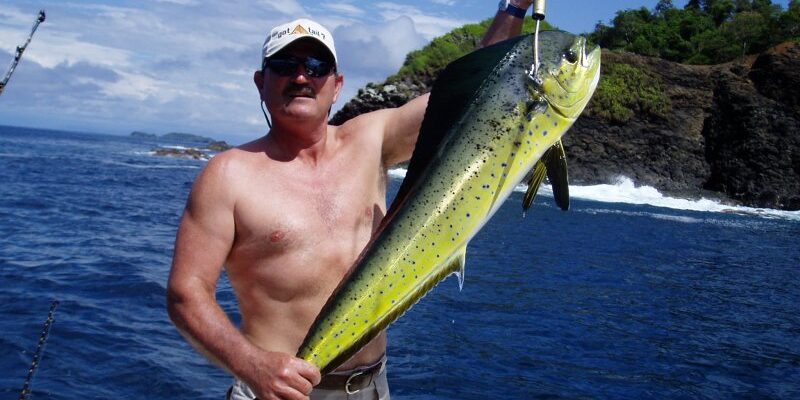 Fishing last two weeks in November had good inshore action – large cubera snapper – rooster fish and except for two slow days good off shore. Lots of yellow fin tuna, wahoo, larger dolphin and three black marlin. Weather was more rainy than usual but no problem for fishing. I Do not book trips in October – worst month here for weather.

December was the same-only better and with sailfish starting to turn up – multiple strikes common – two blue marlin and four black marlin. Also large yellow fin -over 100 lb. are here already. We have schools of smaller yellow fin all year but the big ones start showing up in January with March and April the best months for large yellow fin and May the best month for the shear numbers of yellow fin. Last time they showed up early – first week in January – it was a big year here for large tuna so off to a good start for them. Captain Lee Campbell

Capt Lee,
Just dropping a note to say thank you for one of the best fishing trips my brother and I have experienced in some time. The boats, crews, facilities, coordination of transport and especially the food were all excellent. The fishing was great as well with the two of us catching a Sail Fish each,1 nice Blue Marlin, several nice Wahoo’s, a nice Rock Snapper, several very nice Yellow Fin Tuna each and an estimated 40 to 50 nice Dorado over 4 days of fishing last week. Be sure we will return again in the future when we can manage to get reservations. I am also attaching several photos you can hopefully use in the magazine article. Wishing You and All Your Staff a Merry Christmas and a Prosperous New Year!
Robert (Bob) Fielder – President – Black Gold Oilfield Services

Hello Lee,
We had a great time fishing in Panamá. We hope to come back soon. Merry Christmas and a happy new year. – Thanks, Carlos Alberto – Bueno Netto

Hi Lee, Just getting back to a normal daily routine. Again want to thank you & your staff for the first class service and great fishing.
Thank you, Chris & Vivian Etmanczyk