We had 8 groups this month with 10 Black and 1 Blue marlin released. The big story was the almost daily double digit number of large Dorado (dolphin). This is the time of the year for them but have never seen so many 20lb plus fish here for such a long time. Also Mullet snapper has been very good – with a lot of them caught on surface poppers. Cubera snapper and Rooster fish has been good – yellow fin tuna have been spotty but have caught some nice fish and they are starting to show up now. Sailfish has been good also with many fish caught over 100lb. Wahoo has been very disappointing – usually double digit per day this time of year but have only caught a few. Capt. Lee.

We have our own version of Big Foot now – Steve was walking with his camera out one morning to get some photos of the Monkeys and ran across a big black cat. Photo was very fuzzy but you could see by the tail that it was not a dog. With so many Howler Monkeys and all the other wildlife here on Boca Brava Island it would not have to work hard for a meal.

Jaguar sighting:
“On a fishing trip to the Panama Big Game Fishing Lodge-this is back in the jungle with no roads, only river access. Like a 4-Star boy scout camp for adults. Got up early to explore the surroundings and soon found myself eyeball to eyeball with a very large black cat! He was about 30 meters away when he suddenly turned and slinked walked away down a narrow trail; luckily I had my camera and whipped it up and got a hurried shot! Back at the lodge the boys accused me of knocking back Jack Daniels for breakfast! But I had proof-the owner had never seen a jaguar on the Island before. Steve 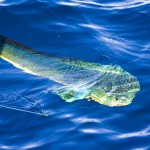 Hi Lee,
My son and I had a great time fishing for three days at your lodge. The accommodations were great, food was good and the staff were very nice. We also enjoyed the other guest at the lodge. I will not forget the doctor sewing up his wife’s head in the lodge as we sat around eating chips and drinking cold beverages??? As for the fishing, it is top notch. I have fished all over the world and there are not many places that you hook into two marlin and a salifish at once. We had six marlin on in one day and my son landed a 500lb black, wow. The “smaller” fish were great too. catching 30-40lb dorado and 40-50lb roosterfish will keep you busy and real tired at the end of the day. If I could change anything about our trip to biggamepanama is that I would have stayed longer. We will be back and yes for even a bigger marlin, they are out there. Thank you once again and stay in touch. Bill and Will.

Hi Lee,
We wanted to let you know that we haven’t stopped talking about our stay with you this past week. The fishing was great, your people were terrific, and you were a most gracious and attentive host. Compared to other fishing trips we’ve all experienced, this was at the top of the list. I will have our expert photographers send their exciting pictures directly to you. Again, thanks for everything and we look forward to returning possibly next September if our schedules permit. Regards to all, Larry. 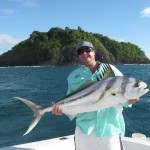 Thanks Lee for all fun we had fishing. The food was out of this world. I though I had gained a few pounds, but due to the great food I lost 5 pounds. The boat crew were the best I have ever had. Peter

Lee, Thanks – we had a great time, and nothing but praise for your crew. Charles. 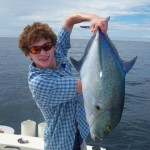